The value of blockchain in socializing, entertainment, and advertising is expected to grow 26x by 2026 to reach $4.37 billion. This will be largely thanks to the growth of the metaverse, which heavily relies on blockchain. Many chains can efficiently support metaverse startups, including Solana, and Polygon, and the upcoming Wakatta – but which one offers the best combination of speed, security, and low fees?
While metaverse-like spaces can operate without blockchain (Fortnite and Roblox are two examples), the addition of smart contracts, tokens, and NFTs brings a lot of value to the space:
1) Digital property ownership: metaverse items like avatars, virtual wearables, artworks, event tickets and so forth can be issued as NFTs and owned by the user independently from the platform where they were minted. They can be traded on the blockchain for cryptocurrency, transferred freely to others, etc.
The NFT technology is evolving fast: for example, the new Wakatta blockchain should even allow minting time-limited NFTs, which change their properties with time. For example, a brand may issue NFT flyers to buy a limited-edition item, which, once redeemed, will turn into a discount pass card valid for 3 months, and so on.

2) Trustless identity verification: connecting to apps through a blockchain wallet address prevents unauthorized access.
3) Equal access for all: users from all countries can pay for items in the metaverse on the same terms, as transactions are conducted in cryptocurrency and no bank card is needed. The user has to pay only the standard blockchain gas fee (from as low as $0.001 on Wakatta to $3+ on Ethereum), while brands don’t have to worry about card acquiring fees.
4) On-chain voting: users can participate in decision-making as part of a decentralized autonomous organization (DAO).
Technically any blockchain that supports smart contracts and NFTs can power a metaverse dApp. There are several criteria to consider, however:
1) Processing capacity. DLT product lead at Wakatta Alexander Rumyantsev comments: ‘Imagine that a popular brand launches a limited-time sale and users rush to buy the NFTs, generating thousands of transactions in minutes. A less scalable chain will get clogged and freeze, but a chain that can process 1000 transactions a second or more, such as Wakatta, should resist better.’
2) Costs. If users are to interact with the metaverse many times a day, the fee for each transaction should be negligible. Ideally the chain should allow dApps to subsidize the fees for their users, the way Wakatta and Efinity plan to do. Another aspect is the cost of deploying smart contracts on the developer side.
3) EVM compatibility. A dApp developed for Ethereum or another EVM-compatible chain can be expanded to another EVM chain without much trouble. This allows projects to capture a wider audience.
Wakatta
Wakatta is a brand-new NFT-optimized L1 blockchain built with Parity Substrate, the same modular framework as used by Polkadot and Kusama. Wakatta will support the popular ERC-721 and ERC-1155 token standards, and will be able to process over 1000 transactions per second (30 times faster than Ethereum) with transaction fees as low as $0.001.
As Wakatta is EVM-compatible, it should be able to accommodate NFT dApps built on BSC, Polygon, Avalanche, and other chains with minimal changes. Moreover, dApps running on Wakatta may be compatible with various protocols on Kusama and Polkadot.
Wakatta introduces three innovative NFT formats: upgradable, time-limited, and text-rich. It also enables fair and transparent on-chain NFT auctions, as well as customizable fees that we’ve already mentioned. These improvements give metaverse dApp creators a completely new level of flexibility
Wakatta is positioned as an NFT hub for entertainment and the metaverse, and it’s developed by the engineers of Sensorium Galaxy, a major metaverse project that features virtual reality, AAA graphics and VR concerts. 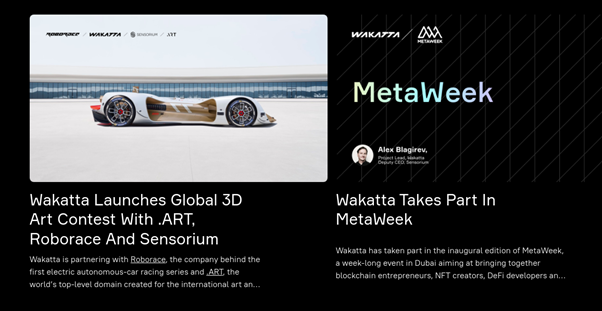 It should be noted, though, that Wakatta’s mainnet hasn’t been released yet, while the other blockchains on our list are already operational. Before the mainnet release, the platform will launch an incentivized testnet – a sort of a competition for testers and validators, where they can earn rewards for completing challenges.
Binance Smart Chain (BSC)
BSC was created by the team behind Binance, the world’s largest cryptocurrency exchange. It powers popular games like Alien World, CryptoBlades, SecondLive, and X World Games; in fact, in Q1 2022 50% of the top 10 blockchain games ran on BSC.
At the same time, BSC’s processing capacity of 160 tps may not be enough to power the massive metaverse dApps of the near future, so projects should consider the scaling aspect when choosing this network.
Polygon
Polygon is an Ethereum scaling solution that can be used on its own as an L1 blockchain or as a base for application-specific sidechains. It already powers the Decentraland metaverse, while another major project, The Sandbox, is going to migrate to Polygon from Ethereum this summer. With an average transaction fee around $0.006 in June 2022 and a transaction finality time under 3 seconds, it’s understandably popular.
On the other hand, Polygon and projects built on it are prone to attacks: for example, in August 2021 Poly Network was exploited for $600 million worth of tokens.
Solana
Solana has one of the biggest NFT ecosystems out there and routinely processes around 2,000 transactions every second. It hosts such popular games and metaverse dApps as StarAtlas, Solice, Afflarium, Cryowar, and Portals.
However, developers interested in building a metaverse on Solana should be aware that the network is prone to outages lasting for up to 48 hours, which severely disrupt dApp operations.
Efinity
Efinity is an NFT and gaming parachain on Polkadot; it uses the same Parity Substrate framework as Wakatta. Efinity was developed by Enjin, a well-known blockchain gaming studio whose portfolio includes Forest Knight and 9Lives Arena.
The popular GameFi project CryptoBlades recently expanded to Efinity from BSC, showing that there is a large potential for NFT games expanding from the older generation of chains (BSC, Polygon, Ethereum) to the next-generation chains designed for NFTs, such as Wakatta and Efinity.
Many more metaverse-friendly chains could be mentioned, including Avalanche, Elrond, Flow, Aurora, etc. The rate of experimentation in the metaverse space is likely to be so intense in the coming years that each of the chains on our list can grow a metaverse ecosystem of its own. In the end, NFT- and metaverse-optimized chains like Wakatta might win over more general-purpose chains, so dApp developers should definitely consider such innovative chains as an option.